First- there’s Mr. Wiggly. That’s right. Mr. Wiggly. I’m sure you’ve used this term before in a completely different context. Mr. Wiggly is mostly passive, until you get a close look at his head, and see his big hairy balls. 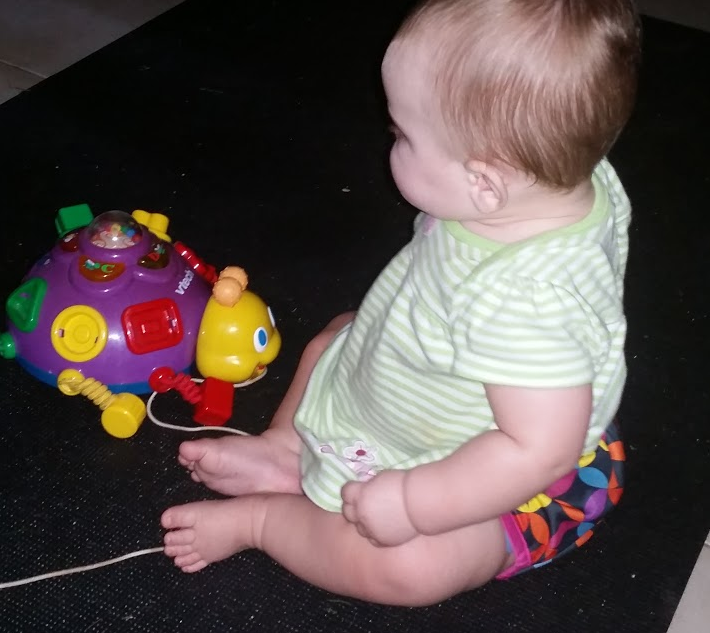 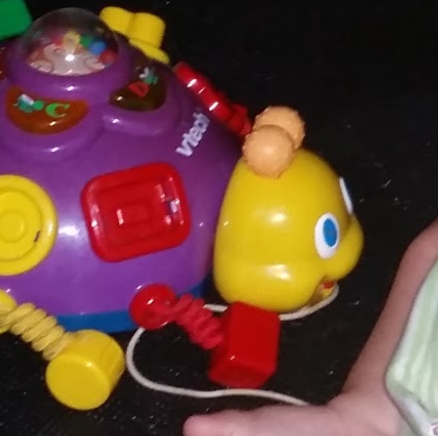 That’s right. Those are Mr. Wiggly’s big hairy balls. What happens if you tickle those balls? He giggles. Tee hee!

Ok, so maybe some toy manufacturer was just having a little adult joke injected into his/her infant toy. That’s fine. We all got a good chuckle about it. 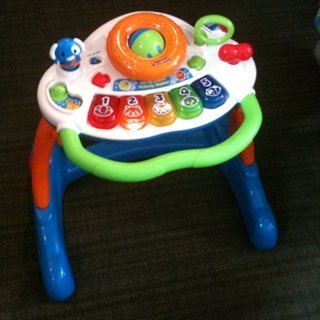 But what about the stuff that makes no sense? Here’s the kid’s walking toy. It’s intended to help her shuffle around the house like an old woman, essentially picking up the skills and balance to aid her in walking. It’s a pretty cute toy, but it says a lot of stupid crap.

Firstly, each of the buttons (numbered 1 through 5) has its own introduction. “I’m the pig! Can we stop?”, “I’m the monkey, I want a ride. Lets go!”, “I’m the cat! Be very careful.”, “I’m the cow, is anyone coming? Look both ways.”, “I’m the lion. Please go slow!” -that’s right, I typed all of these from memory. Each of them has an incredibly annoying voice and they all sound like they’ve been jammed into your car and are backseat driving the hell out of you. Also, why do they have to introduce themselves each time the button is pushed? You’d think the first 100 times would be enough.

Anyway, that’s not what really irks me. Check out the red arrow and the green arrow. Doesn’t this seem like a great opportunity to help them learn left from right? Apparently not. Click on the red left arrow, and it says “Red means stop!” Not left. Weird, right? The right arrow says “Green means go!”, too. Apparently using your colorful turn signals can control stop lights. On top of that, fiddling with another button makes them say “One! Two! One Two!” Does it highlight the one and two? No. No it does not. It highlights completely different numbers. Not helpful in the slightest.

Then, there’s the V-Tech adorable animal interactive tree thingy. Cute, true. However, there’s a panda who sings these inane songs that make me want to smash it. The worst of her diatribes goes as follows: “I’m a sweet panda, cute and beautiful.”

Cute and beautiful? I’m of the firm belief that one cannot be both cute and beautiful. You can be beautiful, and that overtakes cute. You can be cute, but not in the realm of beautiful – well, maybe with some makeup and a nice dress you can get there..but not really at the same time as being cute. I feel like one cancels the other out. So, you freaking panda…you’re not very humble, and your songs are stupid.